A version of this article appeared in Chipping Norton News, April 2012

If you’re driving past Bitter and Twisted towards the town hall, the choice of whether to turn right down New Street or keep straight onto West Street may not seem like a major one. But if you followed the two A-roads which divide at this point to their ultimate destinations, the turn down the hill would lead you to Aberystwyth, while the way past the bus stops would eventually get you to Ilfracombe in north Devon.

Chipping Norton used to be passed by one of Britain’s most important roads: the A34, a major pre-motorway freight route from Winchester to Manchester. But in 1991 its route north of Oxford was shifted east to join the new M40, effectively a giant bypass for towns like Woodstock and Stratford.

The old A34 north of Chippy was turned into the A3400 to reflect its diminished importance, but the section to the south was tacked onto the A44, which used to end by the Quiet Woman antiques centre. The road now runs 155 miles from Aberystwyth to the Peartree roundabout on the northern edge of Oxford, via Evesham, the starting point of regular lorry services – and Horsefair, through which those lorries struggle to pass safely. 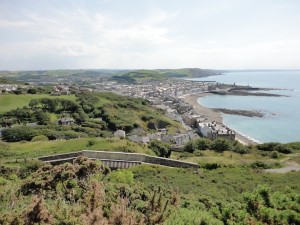 The A44A campaign to move through traffic south to the A40, avoiding Chippy and Gloucestershire pinch points such as Moreton and Bourton-on-the-Hill, has not yet succeeded, and a local bypass for Chippy looks unlikely. But for anyone who wants to visit Aberystwyth (right), which has some nice buildings, a good beach and an amazing setting in the middle of Cardigan Bay, a three and a quarter hour drive along the A44 is the quickest way to get there, and much of it is a beautiful drive.

The A361 is less obvious, but it also adds to Chippy’s traffic. It starts at Kilsby on the A5 in Northamptonshire, and goes through Banbury before merging into the A44 at the Shell garage and re-emerging at West Street. It then takes in Burford, Swindon, Avebury, Devizes, Glastonbury, becomes the main route from the M5 to north Devon, and ends in Ilfracombe. At 195 miles it is apparently the country’s longest three figure A-road, according to enthusiasts’ website Sabre-roads.org.uk.

While no-one except a committed road number fan would drive all of the A361 to get from Chippy to Ilfracombe – it would take five hours, compared with three and a half via the M5, according to the AA – many drivers aiming for the West Country from locations to the east of us will be sent by sat-navs through Chippy, on the way to Stow, the Fosse Way, the A40 and the M5: last year, fans of Northampton rugby club passed through on their way to a game in Bath.

Chippy’s status as a crossroads of long-distance routes adds to its traffic, but that can help local businesses. And you can mentally add some destinations to the road sign by the exit of the Topside car-park: straight ahead for Exmoor, turn right for Cardigan Bay.