It’s synonymous with high-speed connectivity, so why do new users have to wait so long to get broadband? SA Mathieson delves into BT’s exchanges to find out 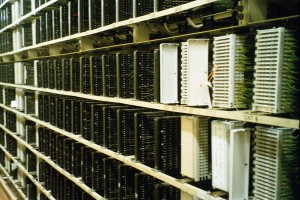 This Guardian Technology article involved visiting a BT telephone exchange in Birmingham to see how broadband connections are made, which is where the image was taken.

In 2012, I received an email from Johnny from America about why it was still so hard to get broadband in Britain, which I replied to here.

This article titled “Broadband’s turn-on frustrations” was written by SA Mathieson, for The Guardian on Thursday 11th January 2007 12.37 UTC

There are few mysteries – like the unexplained disappearance of the Mayan civilisation – that are as baffling as those posed by technology. But ranking among these conundrums is, why on earth does it take so long to connect to a new broadband provider? One feels, had the Mayans survived, they’d have found a way of doing what BT takes two weeks to do in a matter of Mexican moments.

What many people find perplexing is that when you move house, the water, electricity and gas remain on, and the telephone can be working that same day – assuming you order in advance. But for a broadband connection you’ll typically have to wait up to a fortnight. In the meantime, it’s back to dial-up, which after a high-speed always-on connection feels like an electronic water torture.

To find out why getting hooked up to a fast connection is such a slow process, I went inside a BT telephone exchange, where I was surrounded by the metal shelves of the main distribution frame (MDF), a giant rack around three metres high and 10 metres long. It’s lined with hundred of paperback-size connection blocks. Each of the newer, off-white blocks, with its code number written in felt tip on the shelf below, contains the ends of 100 telephone lines from somewhere in Sheldon, a suburb of Birmingham. If you order a broadband connection, the act of physically connecting it – the cause of so much, sometimes frustrating, delay – takes place somewhere like this.

So what has to be done, and why does it take so long? BT exchange construction worker Alan Phillips has worked on the systems for 36 years. He points to the off-white blocks: with these, connection requires a technician to feed a 0.5mm green-and-yellow “jumper” wire through a 1mm-square hole, where its plastic coating is automatically cut.

If a line terminates in a black block – several decades old, with a neatly hand-painted shelf number – the technician will need to solder the wire on. Work in exchanges is split between BT Wholesale staff, such as Phillips, and BT Openreach. Wholesale resells broadband to another BT division, Retail, and to anyone else who wants its service. Openreach is responsible for the lines from the exchange to customers’ homes, on behalf of all communications providers.

Phillips is happy to explain the fiddly process. He picks up a short length of stick with a hole in it, through which he threads a jumper wire. A technician connects the wire on the MDF’s exchange side – which links to internet service providers’ equipment elsewhere in the exchange – and unspools it up or down channels to the customer’s line. The stick is then pushed like a giant needle through the middle of the frame and threaded to the customer’s connection block. Once connected, the jumper wires drop out of the way behind the blocks, looking like a river of brightly-coloured vermicelli.

This MDF is old-fashioned compared to the exchange’s other equipment. The ranks of metal cabinets holding the System X call-switching equipment upstairs may bear BT’s old circular logo, but instead of the loud clatter once generated by exchanges, they patter like rain on a window. And the seven cabinets owned by communications providers, including BT Wholesale, for broadband and non-BT telephone services, are right up to date. About two metres high and wide, these contain equipment including DSlams – digital subscriber line access multiplexes, which combine a provider’s traffic into streams of data. But the way one of Sheldon’s 20,000 telephone lines gets to a DSlam is through a strand of vermicelli wrapped across the MDF.

Phillips says this frame is easier to work on than others: “Some are a lot taller,” he says, and have gangways for the higher levels, rather like the inside of a prison. “We do get a bit of time off for good behaviour,” he quips.

So why do customers have to wait so long for broadband? It’s just that it’s a manual process. Each connection takes roughly 30 minutes, and only two technicians can work on an MDF of this size at once – there’s simply not the room.

BT Openreach gets four working days to do this process and update around 40 databases. So why does the customer have to suffer a two-week wait?

As of last week, 10m customers were connected to broadband through their local telephone exchange, which is twice the target BT set itself for the end of 2006. When it announced its 5m target back in April 2002, fewer than 150,000 lines were connected. Connections usually take around two weeks, and many are delayed for longer by “a tag on the line”, the subject of more than half of all complaints made to communications regulator Ofcom in the year to September 2006, a staggering 1,000 calls a week.

Irate Tiscali customer Cliff Thornton signed up last July on the promise of a 14-day connection. He was finally connected six months later. He fumed: “They blamed BT, the line, the exchange – just about everything. It’s absurd, outrageous.”

A “tag” indicates some outstanding problem. Richard Morecroft, group programme director at Carphone Warehouse, says these include an uncancelled broadband service on the line, BT’s use of incompatible equipment such as fibre-optic links from an exchange to a group of copper lines, or inaccurate records.

BT has set up a helpline for both communications providers and customers affected by tags (0800 169 9576).

From February 14, the watchdog will require providers to connect or transfer broadband services “within a reasonable period” and “with minimal loss of the broadband service”. Bates explains: “On tags, that high-level obligation means that every broadband provider has to do everything in its power to make sure problems don’t happen, and if they do, that they are fixed pretty quickly.”

Also by mid-February, Ofcom will force providers to give customers a Migration Authorisation Code (MAC) for free, to help those transferring an existing broadband service. When passed to the new supplier, a MAC should allow broadband to be transferred with minimal interruption to service. But the drawback is that providing and accepting the codes is voluntary at present.

Quoting a MAC provides evidence that the customer wants the replacement service. One problem with faster installation of new services is that it could boost “slamming”, where salespeople forge a customer’s application. Morecroft says that one reason for the 10 working days required to transfer both broadband and telephone services to Carphone Warehouse is so the “losing” telecoms provider can get in touch with the customer – not to try to persuade them against moving, but so the customer can stop the order if it was faked or made in error.

This aside, new connections could be made faster as better equipment is installed in exchanges.

Carphone Warehouse is technically able to transfer a customer of its fully unbundled broadband and telephone service to a new local address within minutes – if this is connected to the same exchange, and if the previous tenant also used Carphone Warehouse – although Morecroft says the firm is not yet offering this.

However, he adds that even if BT also becomes capable of switching services so quickly, and slamming could be guarded against, Carphone Warehouse would still want two or three days to send a modem and a letter with login details.

On BT’s current performance, Morecroft adds: “Generally, I think it’s happening as fast as can be reasonably expected.”

Broadband turns pairs of copper wires designed for analogue telephones into a conduit for digital services. But unless that copper wire infrastructure was installed quite recently, it is likely to rely on a physical MDF in many countries.

There is a digital alternative – the Active MDF – that can change connections using software alone.

But Tim Johnson, chief executive of analyst Point Topic, says that by 1990 Western Europe had virtually 100% coverage of telephone lines, and as a result few telephone exchanges have been built since. So, few Active MDFs.

“Some parts of the world do have significant numbers of Active MDFs, particularly in Asia-Pacific,” he says, as a lot of exchanges have been built recently to cope with growing demand.

One member of his staff, who previously worked on placement for a Hong Kong telco, was shocked when he saw an old-style British MDF.

The UK’s two-week wait is better than some countries with a legacy of older exchanges, but worse than others. AT&T in California tells broadband customers moving house that “service may be restored in as few as 10 working days” at a new address.

France Telecom, which provides broadband services in several countries, says that it takes 15 to 20 working days to install in Spain, although only four to five working days in France.

· What happens when you order a new service

· Communications provider checks for a “tag on the line”, using a common industry database. If one exists, the provider will ask BT Wholesale to clear the problem, or suggest the customer does so. Progress can only be made when this is sorted.

· The communications provider will then order a broadband service from BT Wholesale, which the provider resells under its own name – unless the broadband provider is BT itself. For a provider other than BT, if it has equipment in that exchange, it will order the line to be either partially transferred (for broadband only) or fully transferred (for phone and broadband). Carphone Warehouse places orders taken that day overnight. · BT gives the provider a go-live date for the chosen service , and schedules the relevant work, including the physical connection on the exchange’s main distribution frame. The line will be connected to either BT Wholesale’s broadband equipment or the provider’s own, depending on the order.

· If the order is for both phone and broadband, the “losing” provider writes to inform the customer of the move, in case this is a mistake or fraudulent.

· The new provider, working back from the go-live date, sends the customer any necessary equipment and a letter with instructions a few days in advance. Carphone Warehouse tells customers the service will be live the day after the actual date, as it may not go live until late in the evening.

· The service goes live, and the communications provider starts billing.

If you’d like to comment on any aspect of Technology Guardian, send your emails to [email protected]