MATTER, each issue of which consists of a single long feature article on science and technology, has run some great stories since its launch last autumn (as well as trying to find new ways to make journalism pay).

In my humble and biased opinion, I think it has just published another one: ‘Ring of steel’ by James Bridle, which I co-edited and is based partly on my Freedom of Information-based research into how the police use automatic numberplate recognition. It’s available from MATTER. END_OF_DOCUMENT_TOKEN_TO_BE_REPLACED 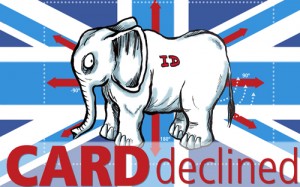 Chris Huhne will today be sentenced for perverting the course of justice, as will his then-wife Vicky Pryce, after she agreed to accept his speeding points a decade ago.

He is part of a Liberal tradition of both being arrested for speeding and helping to abolish ID cards. The instigator of this is someone who (I think) was quoted yesterday at the Liberal Democrat spring conference in dramatic circumstances.

In December 1950, Clarence Willcock, twice an unsuccessful Liberal candidate for Parliament, was stopped for speeding in Finchley. The police constable asked to see his ID card: the wartime identity card scheme had been retained and expanded by the post-war Labour government. Mr Willcock replied: “I am a Liberal, and I am against this sort of thing.”

Yesterday, Jo Shaw resigned from the Liberal Democrats over the party’s support for secret courts, saying: “I am a liberal and I am a democrat and we are against this sort of thing.” It would be surprising if she wasn’t remembering him.

Mr Willcock took his case through the legal system, eventually reaching the High Court – as you can read in Card declined, my new book on the history of identity cards in Britain: END_OF_DOCUMENT_TOKEN_TO_BE_REPLACED

I first applied for the location of police ANPR cameras under Freedom of Information (FOI) three years ago. This article, below and on page 14 of today’s Guardian, is the result of, in effect, a successful failure for FOI. In June, the Information Tribunal reversed its 2011 decision that Devon and Cornwall Police should release its camera locations. However, the evidence the force provided to this year’s tribunal, both written and verbal, sheds new light on the functioning of these systems. END_OF_DOCUMENT_TOKEN_TO_BE_REPLACED

I love Blackpool, mainly because of the rides, from sedate Blackpool trams to the rides at Blackpool Pleasure Beach, culminating in the enormous Big One. There is surely no finer Blackpool experience than plummeting towards the promenade at 87mph, as the sun shines on the sea. END_OF_DOCUMENT_TOKEN_TO_BE_REPLACED

A version of this article appeared in Chipping Norton News, April 2012

If you’re driving past Bitter and Twisted towards the town hall, the choice of whether to turn right down New Street or keep straight onto West Street may not seem like a major one. But if you followed the two A-roads which divide at this point to their ultimate destinations, the turn down the hill would lead you to Aberystwyth, while the way past the bus stops would eventually get you to Ilfracombe in north Devon.
END_OF_DOCUMENT_TOKEN_TO_BE_REPLACED