This week, The Register published a feature by me on the Culham Science Centre in southern Oxfordshire. This includes what staffer Guy Burroughes describes as “the hottest place in 20 parsecs”: the heart of the Joint European Torus, Culham’s biggest project and the world’s largest nuclear fusion tokamak, which at its hottest has reached 300 million degrees Celsius, many times hotter than the centre of the sun. (It’s rare to find a star this hot. 20 parsecs is about 65 light years, although it’s just possible that Mr Burroughes was getting in a Star Wars reference.)

The Register has published eight of my Geek’s Guides so far. Some are tourist attractions or public spaces (Electric Mountain in Snowdonia and my tech tour of Cambridge), some are workplaces open to visitors (including Culham) and some I had to ask very nicely for access, including Goonhilly and the Bodleian Library’s Book Storage Facility.

For all of them, but especially those with limited access, I try to answer the question ‘what’s it like?’ as well as explaining why a place is important and interesting. Sometimes a small detail gets that across, like this stop button I noticed in the massive Torus Hall, which is closed to humans when Jet is running. 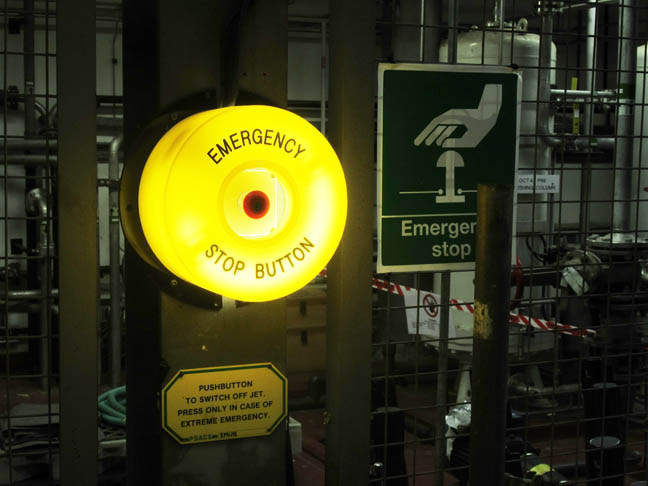 It is the kind of thing you would expect to find in a well-run, safety-conscious facility. It is also the kind of thing that makes you feel you are somewhere potentially very dangerous. It also makes you wonder: how do you define an extreme emergency?

Every workplace should have buttons like this; the ones that actually do often work well as Geek’s Guides.

This is from my monthly newsletter, which you can see in full here. Sign up below.