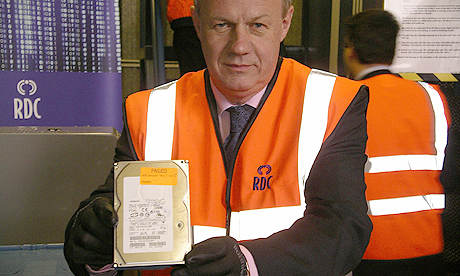 On 11 February 2011, I got on a train to Witham in Essex to witness Home Office minister Damian Green destroying hard drives used for the ID cards’ National Identity Scheme – and took photos including this one. (That’s Mr Green, in the hi-vis vest, tie and black gloves.) The resulting news story is here, along with a gallery. ID cards Shred Day was, at the very least, surreal. 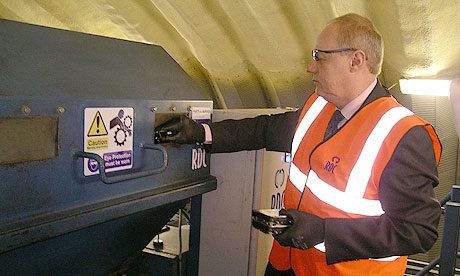 The event represented the end of the long story of the New Labour government’s attempts to introduce ID cards for its citizens. Tony Blair had proposed identity cards in the aftermath of the terrorist attacks of September 2001, with detailed proposals following in 2002. The Identity Cards Act passed in 2006, after a huge struggle in Parliament between the Lords and the Commons, only to be abolished by the coalition government in 2010.

It’s well-known that Britons had compulsory ID cards during the Second World War, which did not get abolished until 1952. It’s less well-known that Margaret Thatcher’s government legislated for a football fans’ identity card scheme, and the national identity card plans which finally became law in 2006 first surfaced under John Major. But these are stories for another day.*

For the second anniversary of ID cards Shred Day, 11 February 2011, here are some of my Guardian articles on the subject.

In the name of the law (Charles Clarke’s plans for tackling crime with ID cards assessed)
Guardian Online, Jul 14, 2005

CSC and IBM win ID contracts (which are already ready for the abolition of ID cards)
Guardian Government Computing, Apr 7, 2009

* That day has arrived: read the history of ID cards in my book, Card declined: How Britain said no to ID cards, three times over.