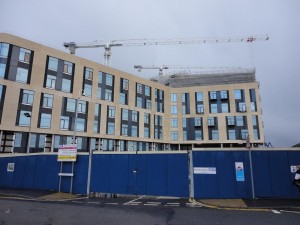 This article appeared in the Guardian’s Society pages on 4 January 2012. I also wrote about North Bristol NHS trust’s progress towards its Southmead superhospital for Guardian Healthcare Network, based on the same set of interviews.

This image was taken of the site when I visited Southmead in mid-December 2011.

Not everyone is happy about North Bristol NHS trust’s proposal to close one of its hospitals as part of a reconfiguration of health services, admits its chief executive, Ruth Brunt. The changes will affect around 500,000 people living in Bristol and south Gloucester. “Understandably, if you have to travel four miles rather than half a mile to get to your acute hospital in the future, there are some people who will be anxious, and feel they have lost something,” she says.

The trust recently published a document detailing its planned alternative to the hospital at Frenchay: a “health and social care campus” with a community hospital and nursing home owned by the private sector, a new GP surgery, “extra care” housing, and outpatient services for people with long-term conditions.

Mike Farrar, head of the NHS Confederation, which represents health service managers, last week said that at least one in four patients in hospital beds could be better looked after in the community, or at home, rather than in the “outdated hospital model of care … Hospitals play a vital role, but we do rely on them for some services that could be provided elsewhere. We should be concentrating on … shifting resources into community services.”

Brunt couldn’t agree more. “Twenty seven per cent of the patients sitting in my acute hospitals don’t need to be there,” she points out. “Acute hospital care is extraordinarily expensive, and despite what patients think, acute hospitals are fantastic if you really need hi-tech acute specialist care but they are not that great if you’re getting better, or you’re waiting well.”

Before moving to Bristol Brunt worked in Devon, which has a network of community hospitals that treat patients near their homes for less serious conditions. “I was horrified coming to Bristol that there was such a poor level of community provision,” she says. “It felt like you either had to be well enough to receive your care at home, or you were in hospital. There was very little provision in between.”

The Bristol health services plan was developed over several years by the city’s three primary care trusts, three acute hospital trusts, its mental health trust, ambulance services and other public sector organisations. It aims to provide, by 2014, a £22m 68-bed community hospital located in the same building as a nursing home. The building will be owned and operated by a third party, probably a consortium of a construction company and a care provider, which the trust hopes to choose by the end of this year. It expects to lease the hospital area, with the ability to vary the number of beds used to cope with extra demand, at an annual cost of around £3.5m. Unlike a private finance initiative (PFI) deal, ownership of the building will remain in the hands of the private sector.

GPs may also lease beds in the community hospital, as an alternative to sending patients to a “superhospital” that is scheduled to open in 2014 on the trust’s other site some 6km (4 miles) away in Southmead.

The plans for the health and social campus include extra care housing, where people can move to in order to continue living in their homes while receiving enhanced health and social care, and outpatient clinics for older people and those with long-term conditions, such as diabetes and illnesses that require respiratory medicine. The trust’s plans for the Southmead hospital include the assumption that 40% of outpatient activity will move to community facilities.

The community hospital will have diagnostic facilities that will provide blood tests, x-rays, scans and echocardiograms, and physiotherapy, dietetics and occupational therapy. A section of the site will be reserved for a new GP surgery, and an existing brain injury rehabilitation unit.

“We were tantalised by the possibility of developing a whole health and social care campus at Frenchay, which was focused around reablement and rehabilitation, not just maintenance care but actively focused on returning people to independent living,” says Brunt.

Frenchay will also improve North Bristol trust’s finances, with part of the site being sold for residential housing. Proceeds from the sale of homes will reduce the PFI debt from building the new £430m hospital at Southmead and boost the trust’s planned application for foundation trust status, which requires evidence of financial stability. Selling land at Frenchay will reduce the PFI cost to around 7% of the trust’s annual income. As a result, Brunt says: “We can make our long-term financial plan stack up.” she addssays Brunt

Conservative councillor Trevor Jones, who sits on South Gloucestershire council’s health select and development control committees thinks the trust has done a good job of engaging with opponents of the hospital’s closure. Campaigners from the Save Frenchay Hospital group joined a Frenchay Project Board, which asked the trust for changes to its plans – most of which were agreed. “The big one for local residents is the capacity for a new GP surgery,” says Jones, as the area will get several thousand new homes. The plans for intermediate care for older people are also popular. “They can see a way of staying in their own homes, or moving into the care village,” he says.

Trade union Unison is concerned that the community hospital will not be run by the trust and that staff will not be NHS employees. “The new build at Frenchay takes the NHS further into the hands of private health companies,” says Simon Newell, Unison’s south-west regional head of health. He adds that there was no prior consultation with staff or unions before the tender document was published. “With all staff being employed by a contractor, they will have no access to NHS pay and terms and conditions, and we would have serious concerns about training and quality of care.”

In response, a spokeswoman for the trust says a nursing home site alongside NHS beds would “offer an opportunity for an integrated approach to patient care with possibly the third-party partner providing nursing care for the NHS beds and staff employed by North Bristol trust providing rehabilitation support. However, we shall need to carefully explore this in conjunction with potential third party partners and no decisions have yet been made,” she adds.

Providing intermediate – and cheaper – alternatives to acute hospitals fits well with the government’s attempt to increase efficiency in the NHS without increasing funding. So could North Bristol’s plans provide a blueprint for other trusts? Candace Imison, deputy director of policy of the King’s Fund health thinktank, believes the trust has a good chance of success because its reconfiguration involves just two sites, and that it could work in other areas.

For Brunt, reconfigurations can work when all the organisations with a stake in health and social care in an area co-operate. The difficult part is convincing the public that the loss of acute hospital beds is a price worth paying – but this is something the NHS has to do. She says: “This is about services, not just about facilities.”

• SA Mathieson is a journalist and a senior healthcare analyst for Kable, the public services market intelligence specialist.