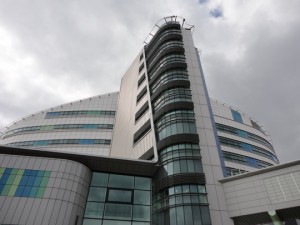 The new Queen Elizabeth Hospital in Birmingham, which treats soldiers returning from overseas next to NHS patients, is a great example of how well a new hospital can work.

All articles and posts on hospitals

This article titled “How Birmingham moved into its new NHS hospital” was written by SA Mathieson, for theguardian.com on Wednesday 18th May 2011 08.00 UTC

The new Queen Elizabeth Hospital, which has colours and lines reminiscent of an ocean liner, is clearly visible from Julie Moore’s window. The chief executive of University Hospitals Birmingham foundation trust enthusiastically lists what it provides: 44% of patients with private rooms, en suite bathrooms for all, no more mixed sex accommodation, greatly improved infection control and proper room for equipment not invented when the old QEH – the newer of the trust’s previous hospitals – opened in 1937.

“It is just better for patients all round,” Moore said last week, as the trust prepared to move the fourth and final wave of in-patients to the new hospital. On 11 May it did this successfully – 10 minutes ahead of its plan. The trust will now move out-patients into the new building, in three phases ending in November, to complete its move of patients from Selly Oak hospital to the south and the old Queen Elizabeth Hospital across the road.

Moore speaks with pride about the first phase of the move, which took place in June last year and involved moving patients from Selly Oak by ambulance. “We moved 500 patients in 51 hours without an incident, other than the bacon butties that were on the way to me being nicked,” she says. “I know who by.”

Moore, who has worked for UHB for nine years, was previously the trust’s chief operating officer, after filling a similar role for Leeds Teaching Hospitals trust.

“Operations is what it’s about, it’s the work undertaken by the organisation,” she says. “I’ve always wanted to do operations. It’s that patient-facing, patient-interfacing bit of the organisation.”

While she adds that successful chief executives can come from a range of backgrounds, leading the operational work meant she already had that cross-cutting view: “I personally think it’s the best preparation [for being chief executive], but I stand ready to have a good debate with some of my colleagues – over a drink.”

Planning for the move started two years in advance, with the trust taking advice from NHS Lothian over its move to Royal Infirmary of Edinburgh – another new hospital, also built under the private finance initiative by Balfour Beatty and its Consort Healthcare partners – and from DHL and BT, companies with which the trust has a learning arrangement. The plans for the move ran to 8,000 lines, planned to the last minute: “We almost planned it like a major incident,” Moore says. It has involved the local ambulance service, the local police force and the trust’s removal firm Harrow Green, which had at its peak more than 500 people working on the move.

Unlike some new hospitals, the new QEH is right next to the old one rather than out of town, between Birmingham University’s main campus – including its medical school – and residential streets. Moore concedes that this has made planning the new building more complicated, but adds: “The important thing about a hospital is that it’s part of the community.” The trust runs a Learning Hub, which has has helped get 1,200 long term unemployed locals back into employment, in healthcare and other areas. It has had to engage closely with neighbours, such as over the new helipad.

Moore says the total time taken to plan the new hospital – 10 years – has caused its own problems, as in that period it became clear that it needed more day beds and fewer overnight ones. “If there’s anything I could do differently, it would be to shorten the process,” she says, although she adds that the new building is very flexible, allowing adjustments. She expects this process of change to continue: although the 44% of patient beds in private rooms is very close to the 40% of patients who want them, it is older patients who prefer the company of shared wards. Younger generations might retain their preference for single rooms as they age, which could mean greater demand.

The reason Moore knows these preferences is because the trust has asked. The screens by every bed in the new QEH have collected 23,000 surveys in the last three months, and senior managers have immediate access to results, through systems such as graphical dashboards – although a specific complaint about cleanliness on a ward will go directly to the responsible matron’s BlackBerry. The trust has already sold use of its in-house business intelligence system, Healthcare Evaluation Data (HED) to a number of other NHS organisations.

It is now planning to do the same for its electronic prescribing system, which aims to stop the worst errors (such as patients allergic to penicillin being given a drug that contains it) and posts warnings on, or requires a senior professional to agree to, other potentially harmful prescriptions. Dave Rosser, executive medical director for the trust, says that the number of errors blocked exceeds 550 a day when a new batch of trainee doctors joins, although it falls to around 200 as they near the end of their four month stretches. The trust is marketing its Prescribing Information and Communication System, which also tracks patient checks and tests including for MRSA and C. Difficile, through vendor CSE. Moore says the system is preventing 60% of prescribing errors.

With the new building, added to the attitude of staff, a research based culture and good patient interaction, Moore believes the trust can excel. “We have nothing to stop the organisation here being amongst the very best in the world for healthcare,” she says.

This article is published by Guardian Professional. Join the Guardian Healthcare Network to receive regular emails on NHS innovation.