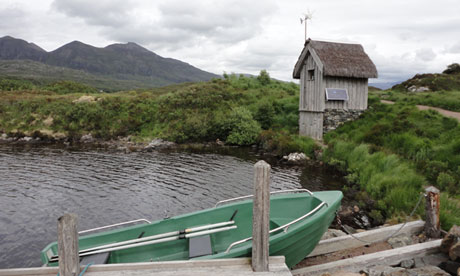 Today on the Guardian’s Social Enterprise Network I write about two decades of community land ownership in the north-west Highlands of Scotland. Assynt Crofters’ Trust bought the land on which 13 townships stand on 1 February 1993, and the majority of the huge, but very lightly populated, area around Lochinver is now owned by its community. Today sees a further step, with a government-funded community purchase (the Scottish Land Fund, via the Big Lottery Fund) of the smokehouse in Achiltibuie, a little to the south – along with three announcements elsewhere in Scotland.

I have visited this beautiful area several times over more than a decade, and the community’s shift from remote landlord to being the landlord is pretty remarkable. It has historic resonance in the Highlands through its reversal of the clearances, but it looks like an idea that could work elsewhere in the UK. Thanks to John MacKenzie, Ray McKie and Ken Keith of Highland Adventures for their time discussing it.

The piece is illustrated by one of my own photos – above – of one of the compost, green-energy powered toilets on the all-abilities walk on the Little Assynt Estate.

Today, the Big Lottery Fund announced £788,600 in funding for four Scottish communities to buy parts of their neighbourhoods. Stronafian Forest on the Cowan peninsula in Argyll, the Covesea Lighthouse in Lossiemouth (which will become a museum), the land around Midlem’s village hall in the Borders, and a fish smokehouse in Achiltibuie (the coastal village in the north-west Highlands) will all be owned by local people through trusts or community companies, using money from the £6m Scottish Land Fund.

This month also marks the 20th anniversary of the first such community land purchase of recent times in Scotland, when a group of townships bought 33 square miles of land from a private owner, a few miles north of Achiltibuie.

The Assynt Crofters’ Trust took title to the North Assynt Estate, 21,300 acres of coastal land north of Lochinver, on 1 February 1993 after hastily raising £300,000 to buy it from the liquidators of a Swedish property company. Locals had only found out it was for sale because a potential buyer’s seaplane had been stranded by the tide, and the local crofter asked to refloat it with his tractor had asked why they were there.

Community land purchases have since proliferated in Scotland; the residents of Eigg bought their island through a trust in 1997, and the idea gained legislative support from Scotland’s 2003 Law Reform Act. But it has also expanded in Assynt: three community-run organisations now own nearly 60% of the parish’s vast area.

“We’re now in control of our own destiny, for better or for worse,” says John MacKenzie, one of the founders of the Assynt Crofters’ Trust, which includes directors from each of the 13 townships within the estate, with membership limited to crofters and owner-occupiers. “Life has continued unchanged largely, except that we make the decisions, rather than an absentee landlord.”

Assynt is an area of extraordinary natural beauty, and there is little appetite for large-scale development. But the trust has built new social housing – something which MacKenzie says that previous owners were reluctant to do, and an issue of historical resonance, as Assynt was included in the 19th century Highland Clearances, under which locals were expelled by landowners in favour of sheep. Now, with the Albyn Housing Association, the crofters’ trust has built new houses for rent in the village of Stoer, and in 2000 opened a 225kW hydroelectric power station at Loch Poll near Drumbeg.

But community ownership has also stopped some development. In 2005, the Assynt Foundation, a charity set up by the local community, bought the 44,400 acre Glencanisp and Drumrunie estate for £2.9m, with money from the Scottish Land Fund and various charities, backed nearly two to one by the 804-strong local electorate in a poll required by the 2003 law. Like the crofters’ trust, the foundation considered generating renewable energy, in its case through wind turbines. But Ray McKie, a local who has been involved in all of the area’s community land projects, says the idea generated “a huge backlash” among local residents, and was dropped.

Instead, the foundation – whose land is almost entirely wild, including mountains such as Suilven – has refurbished a Victorian hunting lodge to attract more tourists, provide local employment and as a base for community activities.

Widening the area’s appeal has been a focus for Culag Community Woodland Trust, set up in 1995 to run woods on the edge of Lochinver under a long lease from the Vestey family, owners of an international food group and – until recently – most of the area. It then bought the 2,900 acre Little Assynt Estate from the Vesteys in 2000 for £244,000, again with backing from charities and government.

The trust has established a mile-long “all abilities path” on the estate, a wild area on the main road several miles inland from Lochinver. This features shallow gradients, a good path surface, heather-thatched shelters and wind and solar-powered compost toilets. The path is accessible by wheelchair users and those with limited mobility, and runs past slipways for fishing boats specially adapted for disabled anglers. “A huge number of people visit it each year,” says McKie.

Ken Keith, who runs local walking and climbing company Highland Adventures, says that such facilities allow him to provide visitors with a range of options: “They don’t all want to go rock climbing in Reiff or summit Suilven,” he says. The Little Assynt Estate or the Culag woods provide a taste of the wilderness for those who don’t fancy hiking up a mountain, as well for those who are not able, he adds.

Ray McKie says that community land purchases almost always need partners – the crofters’ trust raised most of the money itself, but only through a high-profile appeal – and these organisations have their own agendas: “You inevitably have to compromise with these bodies.” The Little Assynt and North Assynt estates are near to the Quinag Estate, a mountain bought by the John Muir trust, which has also contributed to the Assynt Foundation. But the John Muir trust has decided to carry out deer culling on Quinag to reduce tree damage, which is opposed by many locals – because, with no fences between neighbouring estates, the culling could damage their income from deer-stalking.

Despite such problems, McKie would advise any community considering a land ownership bid to go ahead. “It’s one of those occasions in your life where you may regret that you didn’t try to do it,” he says. “With the crofters’ trust, there is a huge difference in how many people look at their lives and the future. A large number of people have been empowered because they have been involved in serious and ongoing decision-making.” There have been sceptics, he adds: “But I think over the years they have been disproved.”