ComputerWeekly.com has published an article by me on the options for NHS organisations on bringing in electronic patient record (EPR) systems, such as big bang (Cambridge University Hospitals and Epic), open source, linking up through a portal and improving imaging (both PACS/RIS and scanning paper records). You can read it here, with copious links to more detailed coverage by ComputerWeekly.com including my piece on Cambridge University Hospitals from December. 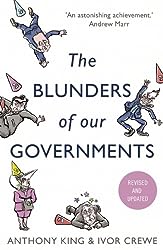 However, the clearest lessons I have passed on come from The blunders of our governments

, a detailed study of government idiocy by Anthony King and Ivor Crewe. They describe the National Programme for IT (NPfIT), which failed to provide EPRs to most of England’s trusts, as “the veritable RMS Titanic of IT disasters” and “doomed-from-the-beginning”. As they point out, it was started at a meeting “between a prime minister [Tony Blair] who knew next to nothing about computers and a clutch of computer enthusiasts”; it was “wildly overambitious”, “far from being essential” and was apparently never subjected to “a serious – or even a back-of-the-envelope – cost-benefit analysis”.

But if there is one thing that Crewe and King say NPfIT got wrong which individual NHS trusts must get right, it is this:

No-one ever thought to ask medical administrators and practitioners whether it was a high-priority project from their own point of view… Largely because the intended end-users of the scheme had been so little consulted, the various IT suppliers often had no clear idea of what they were supposed to be supplying – and in some cases merely sold the NHS whatever they happened to have on hand.

Away from IT projects, The blunders of our governments includes a chapter on ID cards – the subject of my 2013 book Card declined, and more of a political blunder than an IT one – and King and Crewe reserve some of their harshest words for Gordon Brown’s sort-of privatisation of the London Underground in the early 2000s. It should be said that Conservative, Labour and coalition governments all get it in the neck, and deservedly so.

Anyone working on a major project would benefit from reading this book (which also has a stylish cover by Matt Buck). The only danger is that you may end up throwing it at the wall in fury at the tens of billions of pounds of our money wasted through the failure of politicians to compromise when it makes sense, and the apparent inability of many civil servants to learn some project management skills.