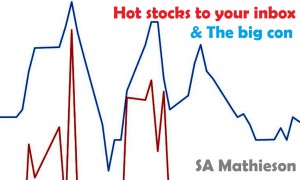 I have just released a new Kindle e-book, Hot stocks to your inbox and The big con. Journalists have a habit of looking at an issue once, or for just a short period, and miss things as a result. With Card declined, I traced the ID cards story backwards; with this new e-book, I have revisited a subject that got a lot of coverage at one point, to find out what happened next.

In 2006, mailboxes everywhere were getting stuffed with very ugly emails imploring you to buy shares you’d never heard of, with headings like ‘Get GDKI First Thing Today, This Is Going To Explode!’ For Infosecurity Today magazine, I collected a sample of stock spam and analysed the companies mentioned – what happened to their share prices when, and what the companies involved said, as well as talking to a wide range of experts.

This e-book republishes the article, ‘Hot stocks to your inbox’ (otherwise only available behind an expensive paywall), but I have also written a new afterword, based on what happened next:

Stock spam continued throughout 2006, and Goldmark Industries continued to be one of its targets. One email, featuring garish green and purple colours and horizontal lines of interference, dated 20 December 2006 and titled “GDKI is making everyone bank!”, quoted a price 17 US cents – accurately, as of 19 December – and a five-day target of $2. On daily trading volumes which the stock has never seen since, more than 5m shares changed hands on 28 December and the price rose to 39 cents on 29 December 2006.

But the party was nearly over. On 7 March 2007, the SEC suspended trading in the firm’s stock for two weeks, along with 34 other Pink Sheets companies. Goldmark was one of three firms given particular prominence in the press release – the 20 December email quoted above was reproduced in a supporting document – and the SEC estimated that 100m stock spam emails were being sent weekly.

The SEC called this ‘Operation Spamalot’. In a speech, its chairman Christopher Cox said a stock spam email for Goldmark had just been sent to its public affairs director.  “To a certain extent, you have to question the judgment of a crook who spams the SEC.”

The e-book also includes ‘The big con’, another article for Infosecurity Today in which I asked security experts for their best stories about social engineering, in other words fooling employees to give access to company secrets and buildings. It also has a taster of Card declined.

Hot stocks to your inbox and The big con costs £1.59, and can be borrowed for free by Amazon Prime subscribers. It’s Kindle-only at the moment – if you would like to see it in another format, let me know.