I am very happy to say that my ID cards book Card declined is going on sale at Jaffe & Neale, Chipping Norton’s leading bookshop, tea room, ticket seller and general place to be seen. (It tweets too, as previously noted.)

To suit bookshops, I have produced a new ‘US trade’ format paperback priced at £5.99 rather than the near-A4 version previously on sale. This also includes two articles I have written since first publication in March, on the civil service and ID cards for Guardian Public Leaders and ‘The decline of the great British government IT scandal’ post which appeared on Campaign4Change. 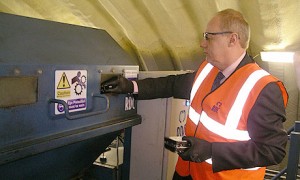 The new version also has a nice picture of Damian Green posting ID card hard drives into that big shredder in Witham on the back cover. Which, all-in-all, surely justifies it costing £1 more than the previous A4-style version. (Print-on-demand printers charge a certain amount per page, and the new paperback has twice as many pages as the previous one.)

This is now the print version available through Amazon, at the same price. But if you live anywhere near Chipping Norton or if you’re passing through on one of the town’s exciting range of long-distance A-roads, I recommend you visit Jaffe & Neale and buy a copy. And a slice of cake.

I’m talking to other bookshops about selling Card declined, and would love to add more. If you’re an interested bookshop, please get in touch – I now know what a sale or return invoice is.